skip to main | skip to sidebar

The Thai government launches a website to respond to 13 April allegations, but forgets to populate it.

The Abhisit government has taken the public opinion war to the Internet by launching a website depicting its versions of events that led up to, and followed the incidents on Songkran day, 13 April. It also has an English language icon which when clicked results in this sight for sore eyes. 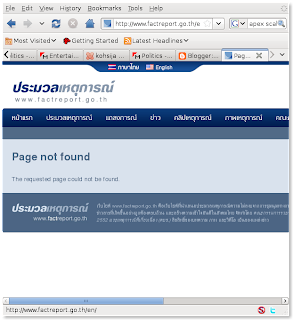 Yes, one could say that the government has nothing to say to foreigners, no facts to refute the opposition's versions of events. The website clearly says, "page not found". Cynics would laugh at the message it is sending out.

However, on the Thai language section, the site has a smattering of no doubt carefully screened pictures and a few video clips. It has a list of government announcements and news clips too. However, as of yet aside from the non-existent English language version of the site, it seems to totally lack any narrative or message and the viewer is left to browse through this scrapbook and come to his own conclusion as to what happened.

Dear Minister Satit, perhaps a simple message along the lines of, "We didn't kill anyone", might have been nice to start readers along the right way.

The only page that seems to be fully populated and narrated is the one with the committee members who set up the website. Yes, of course giving credit to the hard working bureaucrats who made this embarrassing use of public funds shining beacon of truth is the most important thing. Obviously they had to work hard to find pictures of the event all over the Internet and often link to them in-situ, hard coding their pictures links into the factreport site without linking back to their authors' pages or giving them credit half the time.

One almost envisions someone suing the Abhisit government for breaches of copyright or even creative commons share and attribute clauses.

The joke site is produced by the Office of the Prime Minister under which Satit Wongnongtoey is the Minister to the PM's Office responsible for media.

The only redeeming feature is that the site uses the Drupal Open Source engine, which is a nice step up from other government run sites.
Posted by Don Sambandaraksa at 00:12

Don Sambandaraksa
After six years as a columnist at the Bangkok Post, it's time to go paperless.